There are a few cervical cancer facts you need to know. This includes potential symptoms, signs, and hints that you might want to talk to your doctor as soon as possible.

There are so many different reasons why a woman might feel pain during intercourse. The most obvious solution is that there is not enough lubrication. If the muscles are relaxed, the pain should go away. Foreplay is an excellent way to get in the mood and enjoy your time to the fullest.

But if the pain continues regardless of the arousal levels, it might be a sign that something is going on with the body. Experiencing pain and discomfort during sex should be a clear sign to visit a doctor. While the situation doesn’t need to be dire, it can still point to a variety of conditions, from yeast infections to cervical cancer. So, the smartest thing would be to address the problem as soon as it appears.

Also, painful sex can still be caused by a lack of lubrication, and if it is an isolated case, it might not be a reason to worry.

The next symptom that can be a sign of cervical cancer is vaginal bleeding. There are a couple of different types of bleeding a person might encounter. Firstly, they can have abnormal bleeding, which might be related to problems with the reproductive system, and a reason to visit a gynecologist.

There are several different types of cancer that can have vaginal bleeding as a symptom, and they include cervical, uterine, ovarian, vaginal, and others. Any type of excess bleeding either during menstruation or unrelated to it can be a symptom, and it isn’t something that’s considered normal.

Even though cancer is often the scariest outcome, it is far from being the only one. Just because someone notices some blood, it doesn’t mean that it is cancer. There are numerous infections that can manifest this way. It can be related to trauma or a side-effect of some medications. So, before jumping to conclusions, be sure to talk to your doctor. 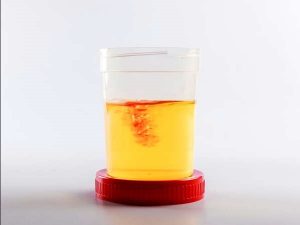 Now, blood in urine can be another sign of cervical cancer, but it isn’t as common. In the majority of cases, blood in urine will show a problem with kidneys. Seeing blood is never a good sign, and unless we are talking about menstrual blood, this can be a cause for concern.

Since cancer is not the only condition that can cause blood in urine, seeing the doctor is the smartest decision, and the person going through this should do it as soon as possible. The majority of conditions can only get worse with time, and eliminating the problem should be the number one priority.

It will also help to know what is the reason for this condition, as well as find the solution before the condition worsens.

In general, anything that seems out of the ordinary should drive you to visit your doctor. If you notice an unusual discharge, there is a chance that it is one of the early symptoms of cervical cancer. Of course, as with the majority of symptoms, it is not enough to form an opinion, and you don’t need to rush with the decision.

We know how scary it might be, and the last thing you need is to worry in advance. As for the discharge, it is often watery or bloody, and it can be heavy, followed by a foul odor. Keep in mind that vaginal discharge is not a symptom on its own. In fact, it’s quite normal.

You need to pay attention to anything that’s not ordinary and differs in any way that can cause concern. Moreover, there are a couple of conditions that can have this as a symptom, and it includes anything from medication side-effects to infection.

The next symptom on the list is related to urinary and bowel problems. As you can probably guess, this isn’t a smoking gun, and if you are experiencing any problems while urinating, there is a high chance that it’s not cancer. But it never hurts to be careful.

This is one of the rarer symptoms of cervical cancer, and it can vary from pain during urination (or bowel movement) to incontinence. Physical pressure can often be a problem in cases when a person has a large tumor near the colon, kidneys, or bladder.

Even rarer, the pressure will block the entire area, causing an obstruction that will make it challenging for a person to urinate or have a bowel movement. Back pain, leg swelling, and bladder problems are rare symptoms, and they aren’t as common as bleeding, vaginal discharge, and pelvic pain.

Whether this bleeding is cancer or not is the question. And there is only one way to find out. Post-menopausal bleeding can also be a sign of polyps, vaginal dryness, uterine cancer, and others. When it comes to cancer, bleeding is a symptom only in 10% of cases, which means that there is a high chance that the problem is elsewhere.

Now, the last symptom on the list is fatigue. The reason why we mention it at the end is that it can be a sign of so many different problems (or none). A person might experience fatigue due to their diet, lack of sleep, medications, and so on.

In some cases, cervical cancer can cause weight loss and lack of appetite, and the person might feel exhausted. In addition, pain can be present in the legs, back, and pelvic area too. If you are experiencing fatigue, the chances are it has nothing to do with cancer. The symptom on its own is not that scary, and many people have busy lives.

Trying to find time for work, family, friends, hobbies, and everything else we want to do is nearly impossible, and fatigue is often a side-effect of us trying to achieve the impossible. But to ensure that everything is ok, visiting a doctor and doing a couple of tests will put your mind at ease.